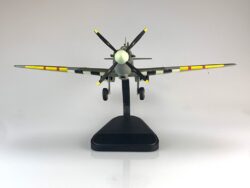 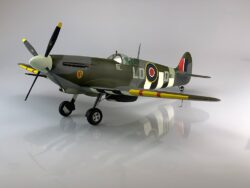 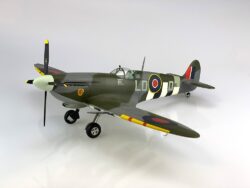 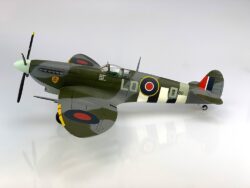 The Mk. IX replaced the Mk. V in June 1942 and on September 12, 1942 a Mk. IX brought down a Ju-86R flying at 43,000 feet. Another major achievement of the Mk. IX took place on October 5, 1944 when 401 Squadron became the first allied aircraft to shoot down an Me-262 jet. Even with the arrival of the Griffon powered Mk. XIV the Mk. IX continued in service until the end of WWII. There were 5,665 Mk. IX Spitfires and its variants produced. When WWII began Pierre Henri Clostermann was rejected by the French military so he traveled to the U.S. and earned his pilot’s license. In 1942 he went to England and enlisted eventually being assigned to the No. 341 “Alsace” Squadron before transferring to the No. 602 “City of Glasgow”. Clostermann had three Spitfires all LO-D with his last one being IXc MJ526. The aircraft wore the Glasgow red lion, the French Croix de Lorraine and was stationed at Longues sur Mer airfield mid 1944. He later flew Hawker Tempests with the RAF No. 274 Squadron.

Be the first to review “Spitfire MJ586” Cancel reply