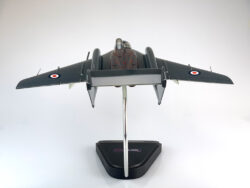 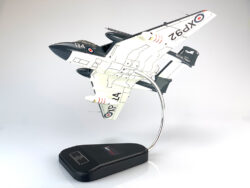 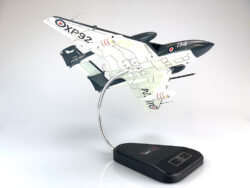 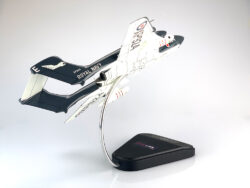 XP 924 first flew on 23 September 1963 and was delivered to 899 Naval Air Squadron at Royal Naval Air Station (RNAS) Yeovilton on 18 December 1963.  The aircraft suffered a number of incidents during its time in squadron service.  Tyre bursts, canopy shattering, some engine problems and, while serving at sea in HMS Eagle, an inadvertent release of a practice bomb near the island of Gan in the Indian Ocean!  Retirement from active service sent her to Royal Naval Aircraft Yard at Belfast in August 1971.  The Royal Aircraft Establishments (RAE) at Farnborough and Llanbedr were in possession from 4 June 1973 until August 1977.  Flight Refuelling took over on 11 October 1977 at Tarrant Rushton and converted her to a Drone (D3) with a Red and Yellow paint scheme to improve visual acuity.  In February 1996 she was taken on by de Havilland Aviation and was re-registered as G-CVIX.  In May 2003 she was painted in “Red Bull” colours as a sponsorship arrangement and was subsequently purchased on 18 April 2006 by Drilling Systems Ltd (Mr Julian Jones) and operated from Bournemouth.  March 2007 saw a return to Naval colours as XP 924 with the 899 Naval Air Squadron mailed fist logo.