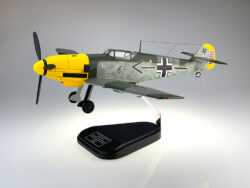 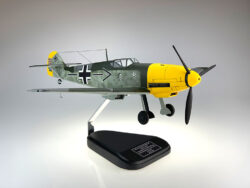 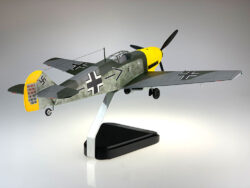 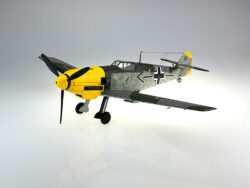 ME109 Flown By Adolf Galland

The Luftwaffe’s principal fighter during the Battle of Britain, the Messerschmitt Bf 109E “Emil” was the mount of some of the conflict’s highest-scoring aces. One such ace was Adolf Galland of fighter wing Jagdgeschwader 26 (JG 26), who rose through the ranks to command the unit from August 1940, and who had achieved nearly 60 victories by the end of 1940. One of the aircraft regularly flown by Galland during the Kanalkampf, as the Battle of Britain was known to German pilots, was Bf 109E-4/N Werknummer 5819, painted in the Luftwaffe’s standard colours for the Battle, including a distinctive vivid yellow nose for identification purposes. Galland went on to become one of Germany’s most decorated wartime pilots.

Hand-carved in sustainable kiln-dried South East Asian Mahogany, this superb 1/22nd-scale model of Werknr 5189, with its undercarriage lowered, has a span of 45cm and a length of 40cm, and incorporates numerous details specific to the aircraft as it was being flown by Galland at the time of his 58th victory on December 5, 1940, when he despatched a Spitfire of No 64 Sqn over the Dover-Dungeness area. These include 57 “kill” markings on the rudder, Galland’s Geschwaderkommodore fuselage markings and his favoured “Mickey Mouse” symbol beneath the cockpit. “I like Mickey Mouse,” he said, when asked about it, “I’ve always liked Mickey Mouse”. The inscription on the optional base  reads: