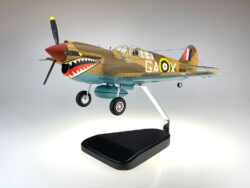 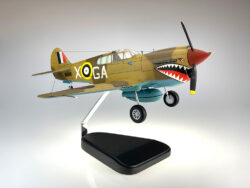 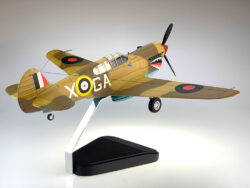 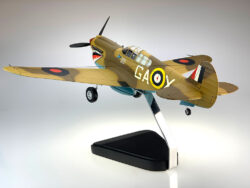 Adorned with the unit’s famous “shark’s mouth” on its nose air intake, Curtiss Kittyhawk I AK770 was the mount of Sqn Ldr Clive R. “Killer” Caldwell DSO DFC & Bar, the Australian commanding officer of No 112 Sqn RAF, which played a major part in the Allied North African campaign.  Part of the Western Desert Air Force (WDAF), No 112 Sqn operated the four-gun Kittyhawk I— equivalent to the USAAF’s P-40D — from the end of 1941, Caldwell eventually becoming the highest-scoring P-40 pilot and Australia’s leading ace of the Second World War, accounting for 28·5 enemy aircraft shot down over the course of more than 300 operational sorties. Kittyhawk AK770 served only with No 112 Sqn, and was struck off charge in January 1943.

This beautifully finished 1/22nd-scale hand-carved model in sustainable kiln-dried South East Asian Mahogany represents Caldwell’s Kittyhawk– coded GA-X — while operating in Libya circa early 1942, and includes an auxiliary belly-mounted fuel tank, 14 “kill” markings, aerial wires and gunsight. Configured with the type’s distinctive undercarriage in the down position, this model carries the standard WDAF markings of Dark Earth and Mid Stone camouflage on the upper surfaces, with Middle Blue/Azure Blue undersurfaces and a red propeller spinner, with the unit codes in white. The inscription on the optional base reads