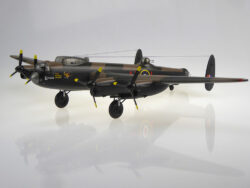 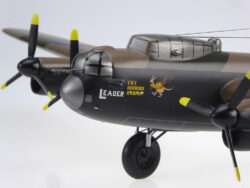 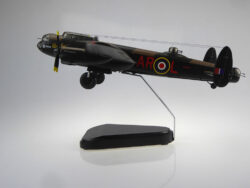 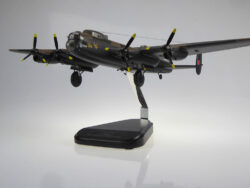 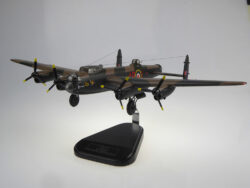 One of the world’s only two Avro Lancasters still in flying condition, PA474 has been a stalwart of UK airshows since becoming part of the RAF’s Battle of Britain Memorial Flight (BBMF) in 1973.  Completed at the Vickers-Armstrongs factory at Broughton, near Chester, in May 1945, Lancaster I PA474 was too late to see wartime action, and after sojourns in South Africa on aerial survey duties and at the Royal College of Aeronautics at Cranfield as a research aircraft, was presented to the RAF’s Air Historical Branch in 1964, while serving with which it starred in two films — The Guns of Navarone and Operation Crossbow — before joining the BBMF in November 1973.

This magnificent 1/56th-scale model of PA474 in undercarriage-down configuration, hand-carved in sustainable kiln-dried South East Asian Mahogany, shows the iconic Lancaster in the unusual colour scheme it has worn since 2016, with the starboard side carrying identity VN-T of No 50 Sqn and the City of Lincoln badge it has worn since being adopted by the city in 1975, and the port side wearing the unit code AR-L of No 460 Sqn RAAF. The latter markings represent the Australian unit’s Lancaster W5005, named “Leader”, which was adorned with nose art depicting a kangaroo playing the bagpipes (indicating the Australian and Scottish heritage of its original crew), which is reproduced on this fine model, along with bomb symbols denoting completed sorties. Finished with rubber wheels, this model has a span of 55·3cm and a length of 37·44cm. The inscription on the optional base reads: